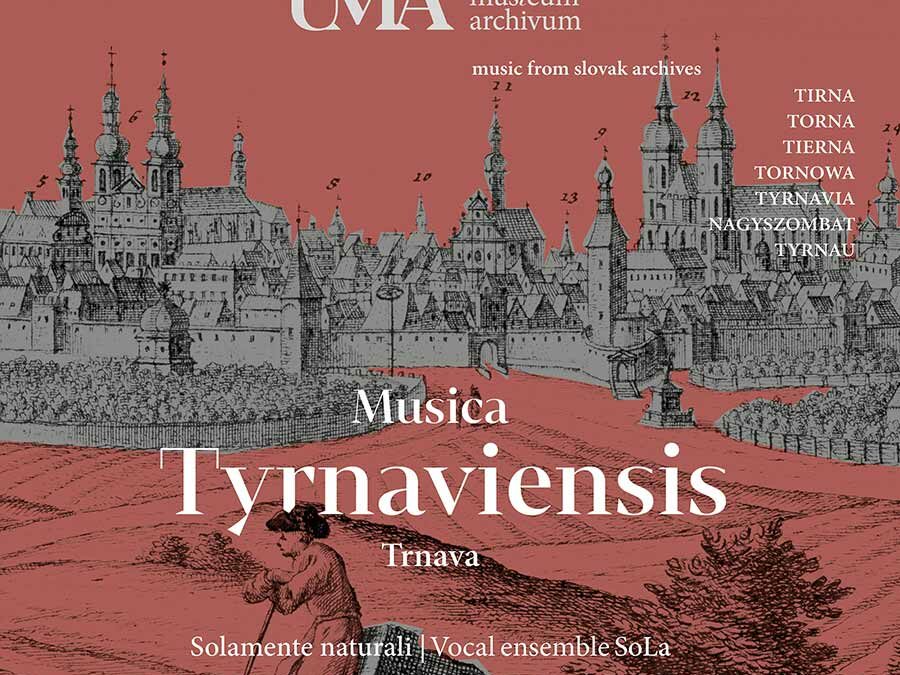 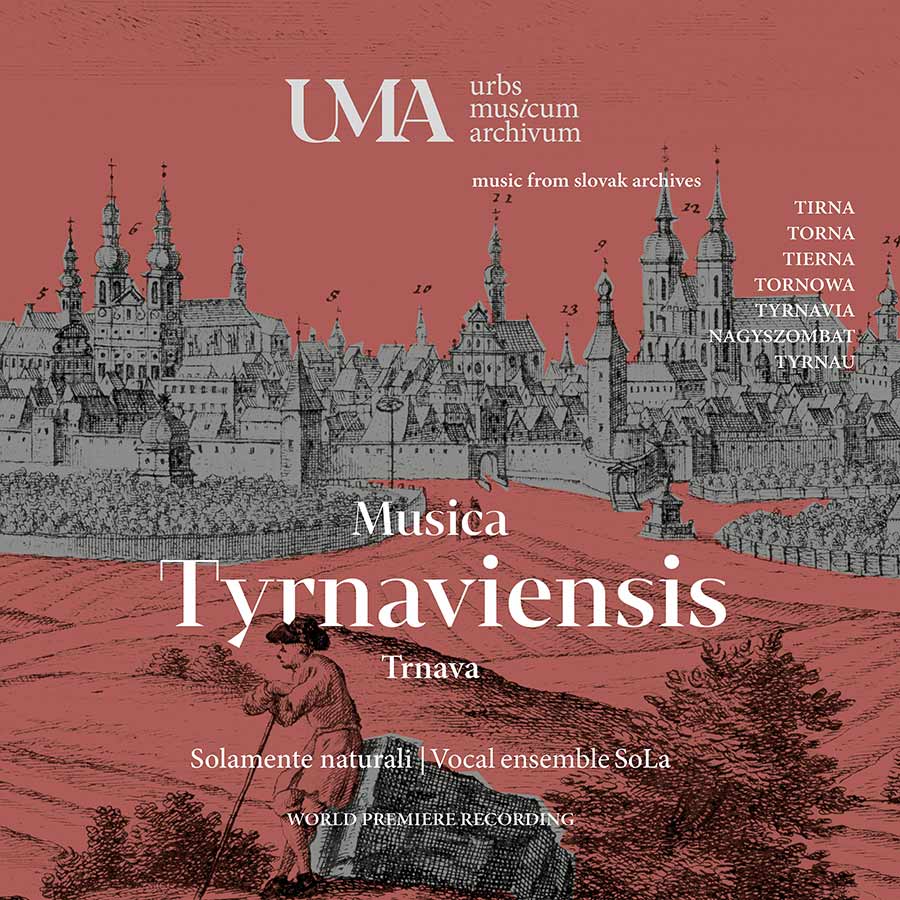 Trnava is the first town

in the territory of the present Slovakia to be granted the privileges of a free royal city (1238) by the Hungarian king Béla IV, confirming its significance as the intersection of trade routes populated since the 9th century. The first ecclesiastical buildings were built in the territory of the original settlements as early as in the 10th century. With the population increasing, the first religious orders came (Benedictines, later the Order of Saint John), Franciscans found home here (1238) and immediately afterwards also Damianites to whom Béla IV granted his own residence for use. In the 13th century the city was surrounded by city walls and in this urban agglomeration with several churches and cloisters – centres of music affairs in which predominantly the Gregorian chant was cultivated – social and cultural life thrived. Trade, including regular markets, offered opportunities for the productions of itinerant musicians and singers (minstrels, igrics), coming certainly – among others – from the nearby locality Igrech (today Igram).

Step by step Trnava joined the big Central European cities. In the 14th century it offered the premises for the monarchs’ negotiations at the highest political level and thus the demands on the setting and facilities were increasing. The newly built parochial St. Nicholas Church owned all required liturgical books and essential notated codices (1495). Simpler forms of polyphony were cultivated (Trnava Manuscript, post-1400). Liturgical music was performed by a 12-member choir (1510), with a possibility of adding the accompaniment by one of the two organs in the church. From the 16th century we know the names of several organists and organ builders. Besides the church, exacting artistic music was also cultivated at schools, where the pupils were given the foundations of education and prepared for the participation in services as choristers.

In the middle of the 16th century the position of Trnava in the Kingdom of Hungary became significantly more important. Due to Turkish raids the Esztergom Chapter with its Primate Pavol Várdai moved to new seats – Trnava and Bratislava (1543). The school transferred together with the chapter and from the times of Várdai’s successor Nicholas Olahus Trnava became the religious metropolis of Hungary. Olahus edified the city namely with a special care for schooling. He merged the municipal and chapter schools (1553) and the teaching of music and figural as well as Gregorian chant became part of the education. Olahus invited the Jesuits to Trnava, who established the college here and led it for several years (1561–1567).
The position of city trumpeter was extremely important in connection with the protection of the town. The first references to the trumpeter come from 1532. Originally the watchers served beside the city gates and on city walls. Provincial diets and church assemblies were held in this relatively safe town in the middle of the 16th century, something that certainly offered opportunities for music productions. Apart from guarding, the trumpeter as an employee of the city and his journeymen – the musicians – were obliged to participate in events in harmony with the city and burghers’ needs. A new strategic object – the city tower (1584) – became the place of the performance of the trumpeter and his aides’ work. In the 16th century the city trumpeter (the tower master) acquired the position of a respected musician in the public and social life of the city.

The Reformation, which considerably affected Hungary in the 16th century, spread the new teachings predominantly via school education. Therefore Ferenc Forgách, the Archbishop of Esztergom, decided to lay emphasis on the schooling and education in the spirit of Catholicism and thus Jesuits returned to Trnava in 1615. His successor Péter Pázmány (1616) supported the Jesuits in the establishment of the college – a grammar school serving as preparation for the university study, where pupils from the whole Hungary, including Protestants, studied. Using the verified experience of Protestants they included the school theatre in education, and that became an effective means of reeducation for Jesuits. Trnava grammar school students performed at important events, e.g. at the Bratislava Castle when Ferdinand II was coronated (1618) and in Vienna before Ferdinand III (1626). Due to the growing number of pupils, dormitories had to be founded. Pázmány founded Adalbertinum (1619) for poor students and Convictus nobilium (1624), with a theatre hall, for the noblemen. Later he initiated the construction of St. John the Baptist Church with a two-storey choir for musicians. He established a fund enabling the education of 7 musicians from which the costs joined with the maintenance of the music ensemble “Musica Templi Tyrnaviensis S. J.” were covered. Having established the college, dormitories and seminary Stephaneum (1631), Pázmány focused on the founding of the university (1635). He did not live to see the consecration of the new church (1637), or the decision to publish the sacred chants in the vernacular (cantiones vulgares), which had been discussed by the synod as early as in 1629. The second edition of the Cantus Catholici hymnbook, compiled by Benedikt Szőllősi for both the Hungarian (1651) and Slovak (1655) worshippers, was released by the university printing house in Trnava in 1700.

Besides the church building, new buildings for the university were invested in. The musicians were accommodated in the Adalbertinum dormitory. They were reinforced by Jesuits from Olomouc who came to Trnava (1642) after the Swedish raid on northern Moravia. Starting from 1643 we can speak about a permanent music ensemble complemented by St. Nicholas Church’s musicians if needed.

When Archbishop Juraj Lippay opened a new general seminary (1648, named the Collegium rubrorum), where he accommodated also the musicians, another of the regular theatre performances took place at this spectacular event visited by members of the highest aristocracy. In the tale about St. Judith the young Paul I, Prince Esterházy featured in the title role. Later he became the patron of the university. The promising development of the city was hampered by two devastating fires (1666, 1683) which obviously harmed also the theatre in the old noblemen’s dormitory. Paul Esterházy, then being in the position of Palatine (1681), decided to present the university and the city with “Theatrum Tyrnaviensis Academiae”. He invested 2,000 florins in rebuilding the auditorium to a representative hall with trough vault, stucco and fresco decorations, furnished with seats, boxes, balconies (1691). In the following years the stage decorations added up, and so did costumes directly from Venice.
The preserved records from 1617–1771 evidence the number of 416 performances. No doubt music was part of them, which means that music productions did not sound from the choir alone. Various music academies and feasts took place. During the 18th century Trnava had no shortage of really pompous festivals. Music certainly accompanied almost every act and the responsibility lay on the chapter and municipality. Therefore it was necessary that at least 5 – 6 music ensembles played paralelly, not speaking about the number of trumpeters and drummers. Therefore Trnava authorities asked other towns for help. In any case, next to Jesuit musicians also the journeymen of the city trumpeter had to be available and competent as well as the musicians from St. Nicholas Cathedral and other churches. Music was cultivated also in orders; namely the Franciscan cloister, with which the names of prominent 18th-century musicians are linked: P. Pantaleon Roškovský, P. Gaudentius Dettelbach, P. Marek Repkovič.

After the Jesuit order was abolished (1773), the city also lost the university which moved to Buda (1777). However, the reverberations of the Trnava cultural academic ambience affected Anton Bernolák from the Stephaneum seminary at the end of the 18th century. Bernolák was the first codifier of the Slovak language and he initiated the establishment of the Slovak Learned Association (1792). Gradually Trnava was losing its importance, also due to the chapter and archbishop’s departure for Esztergom (1820). Burghers succeeded in founding the hospital (1824), building the theatre (1831) and transport line to Bratislava through the first horse-drawn railway in Hungary (1840). After the Congress of Vienna (1815) the public life went through distinct changes. The economically growing burghership aspired to a proper upbringing and education, the process of institutionalization of cultural and social life began. In the early 19th century public concerts were taking place in the Reduta of Hoffman’s public house. Later the Theatre Society was established (1831) and prompted the city to build the stone theatre building, where the Capellmeister Franz Xaver Albrecht was installed (1832). Soon the Music Society was founded (1833) with a mission to uplift the theatre orchestra. The establishment of the Music School (1834), led by the new municipal trumpeter, later the concertmaster of the Society’s orchestra Ján Czarda, helped to bring the quality rising generation up. After the Society was reorganized and renamed to Church Music Society (1838) they focused not only on regular public concerts but also on boosting the music productions at the choir of St. Nicholas Cathedral (today Basilica). It was there in the municipal parochial church where Trnava musical life took place in the run of many centuries. The choirmaster Anton Belohlávek († 1840) had his “Chorknaben”. Similarly to his successor Ján Beránek, he made it possible for the Society to perform during more important feasts. Young vocalists could also study at the grammar school which dealt with music to a great extent, especially in the second half of the 19th century. Alexander Kapp occupied an important position there – he became the cathedral organist in the politically turbulent year of the official dissolution of the Society (1848) – and Ján Czarda, the regenschori. Both were the guarantee of the continuity of the church ensemble, which has been active to this day. Together they led the male choir Tyrnauer Männergesangverein (from 1852).

In the following decades the trilingual town environment witnessed still more conspicuous national and cultural efforts resulting in the establishment of the St. Adalbert Society (1870) contributed to by Andrej Radlinský. The distinctive personality of Franz Otto Matzenauer, a musician, regenschori, teacher, journalist, translator also worked along these lines. At the end of the 19th century, at choir, he supervised two music-loving students of the Trnava grammar school – Zoltán Kodály and Mikuláš Schneider(-Trnavský).
For a long time the note material was being gathered in the cathedral choir; it has been deposited in the Trnava State Archive since 1978. 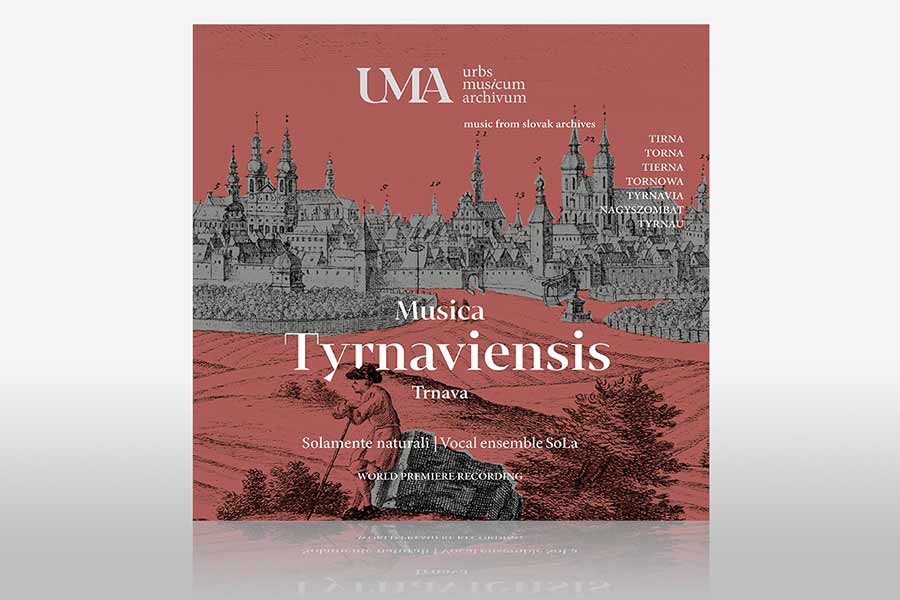 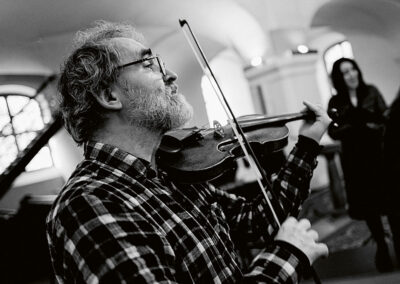 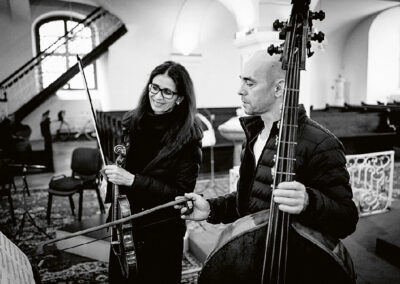 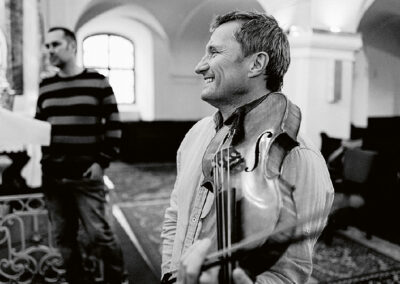 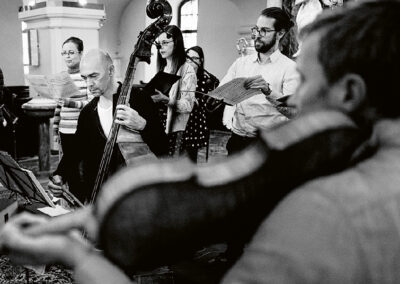 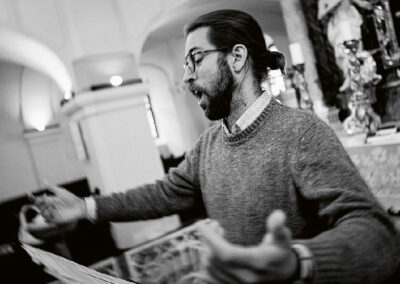 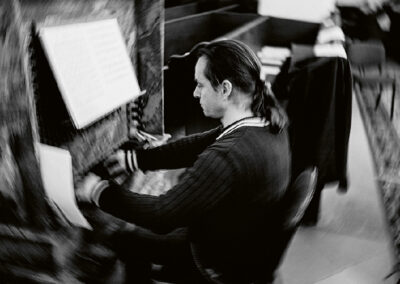 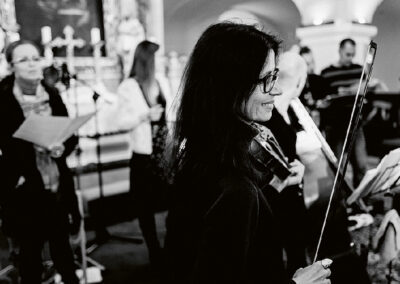 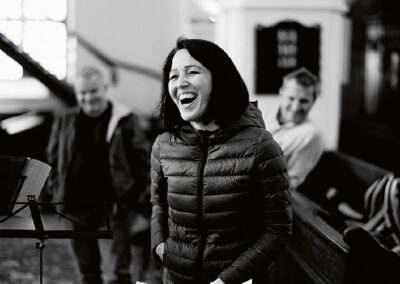 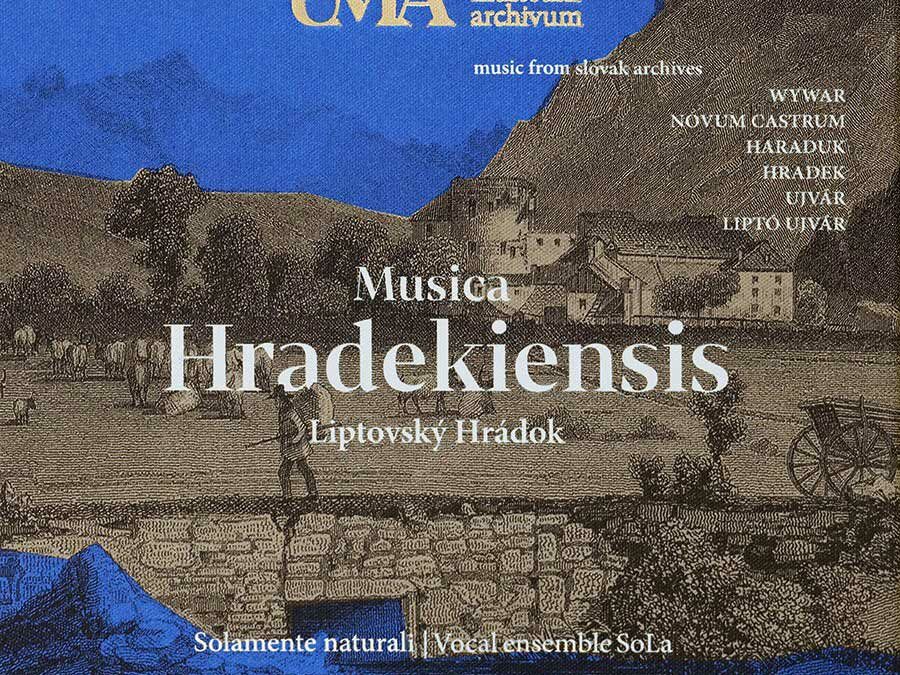 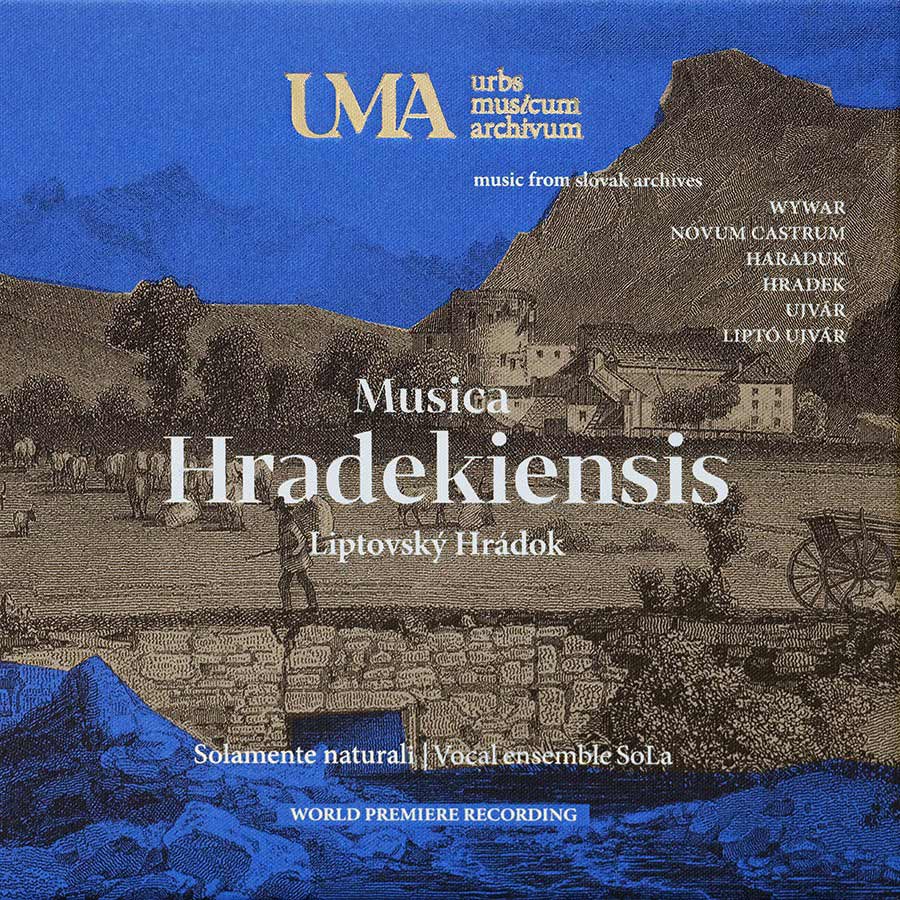 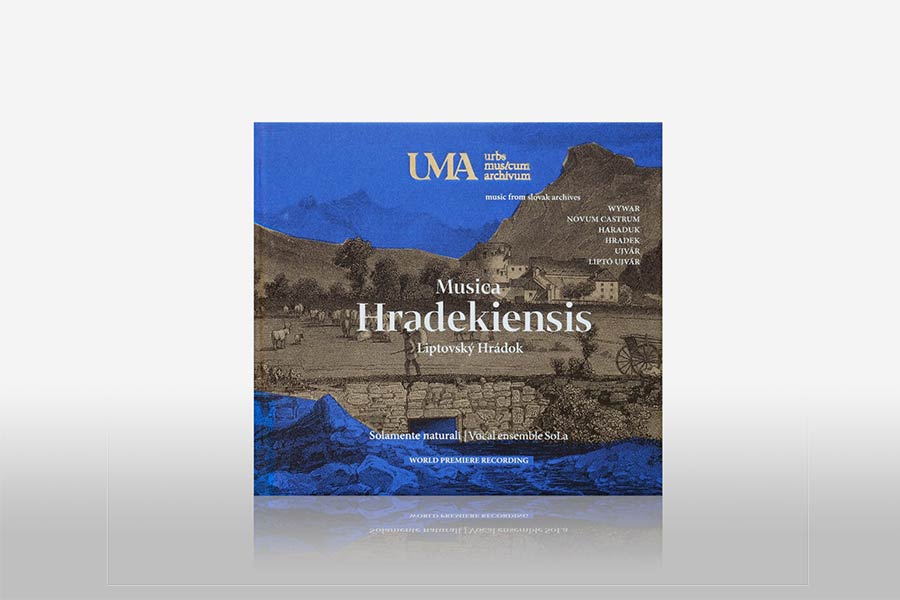